Hello again! After a lovely weekend seeing shows at the Edinburgh Fringe – including the acting debut of Kat Gupta, meeting Heather Froehlich, and joining the legendary John Kirk for a hilarious post-CL2013 catch up – I thought I would give you a little update on how things are going in the CASS office after the first two weeks of my pre-MA summer research time.

Well, to put it simply, things are moving pretty quickly. If my surprise at being asked to present a poster at the CASS launch night last month wasn’t enough, then imagine my shock when an email arrived from Anne Lise Kjaer at the Faculty of Law, University of Copenhagen, inviting me to go over there to attend a PhD course on “The Application of Linguistic Methods in Legal and Socio-Legal Research”…next week! I had met Anne Lise at the launch night and knew that she was interested in what I was doing, but for that to turn into a visit so quickly is a very nice surprise. What’s more, I found out only two days ago that I’m presenting my same-sex marriage research as part of the event! So, needless to say, a lot of the last two days has been spent transforming the contents of my poster into what is supposed to be a 10 minute long presentation. That doesn’t sound much, but since it’s my first ever presentation as a “postgrad” I’ll happily go for something with a shorter time limit. The only problem is trying to fit everything I want to say in to the time – I suppose this is one of the many academic gripes I’m going to discover over the coming months…

So anyway, early Monday morning I’ll be jetting off to Denmark for a three night stay – and be sure to expect a blog with how I manage in my first ever presentation once I return. 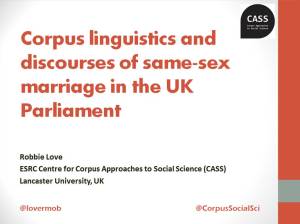 The first slide of my presentation. If I can open with something that looks clever I might just get away with it.

The rest of my time at CASS so far has been spent working on three different research projects with Professor Paul Baker and CASS Senior Research Associates Amanda Potts and Vaclav Brezina. Back in June when I agreed to stay in Lancaster over the summer I knew that I would be working in an environment of experienced and talented corpus linguists, but I didn’t really consider how much you can learn simply by spending time with these people. The projects I’ve been working on are so far are already requiring a bunch of new skills and you could say I’ve certainly found my place on a fairly steep learning curve! The work with Paul is extending the research I had already done on the same-sex marriage debates this year and I’m really excited about getting that written up and finished off. Likewise the projects with Amanda and Vaclav are teaching me a lot about recording everything I do and not ignoring the details. So it’s safe to say I’m learning a lot already – and all before I’ve even started the MA!

Speaking of the which, I found out last week that, on top of the modules I’ll be taking within the Department of Linguistics and English Language next year, I’ll also be auditing a statistical analysis course in the Department of Psychology. So it seems I’ll be brushing up on my A-level maths big-style over the next academic year! I’m told that I’ll be the first ever linguistics student to take this course so I’m very much the CASS guinea pig on this one – let’s hope it doesn’t fry my brain too much!

Looking ahead to after the MA, I also officially accepted my PhD offer this week, starting in October 2014 and hopefully wrapping up within three years by late 2017. Once I’m finished I’ll be nearly 26. Lorks. All I’m hoping is that much sooner than that I will stop being so surprised by everything that’s happening to me and believe that my ongoing transition from undergrad to postgrad is very much real and very much a wonderful thing.

2 comments on “Settling in at CASS”